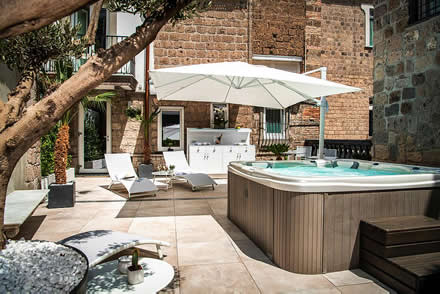 The Sorrento Magi House Relais is the place from which to explore the most beautiful pearls in Campania, Amalfi Coast, Naples, Pompeii, Capri and the Amalfi Coast are less than an hour away.

Sorrento rises above the sea on the northern coast of the peninsula. The coast is divided between the port area of Marina Piccola and the beach of Marina Grande, the workers from the resort town . The town center is Piazza Sant’Antonio, dominated by the church of Santa Maria delle Grazie. Worth visiting are the Renaissance cathedral and the bell tower, the fifteenth century loggia of the Sedil Dominova square, the church dedicated to St. Francis of Assisi and the adjoining cloister. The public gardens you can enjoy a magnificent view of the bay and Vesuvius. Two museums enrich the cultural history of the city: the Correale Museum and the Museum of Wood Inlay.
Continuing along the main road through Sorrento will get to Massa Lubrense, located at the corner of the peninsula where the Sorrento and the Amalfi Coast come together at Punta Campanella, that has become a protected marine park.

Pearl of Campania Capri extends over an area of 3 square km. Famous since the time of the Roman Emperor Tiberius, who built a villa where you can still see the ruins, the beauty of the island include the Certosa di San Giacomo, the Gardens of Augustus, Tiberius viewpoint, Villa San Michele , the square with the Clock Tower and the church of San Michele. An excursion by boat allows you to see up close the Faraglioni and visit the Blue Grotto and the many natural caves scattered along the coast such as the Arco Naturale, The White Grotto, Red Grotto, the Green Grotto, the Grotto of the Saints, the Grotto of the Certosa, the Belvedere and Arsenal.

Typical of Amalfi Coast are the limestone cliffs to the sea cliff. Positano is located along the coast which slopes down from the rocks until you get to the beach and it starts from the Mount St. Angelo and three Pizzi that from the arc of mountains that shelter it in a bowl. The homes of Positano share the same building facades with spacious balconies and domed roofs. The major industry is tourism but also the clothing industry that consists of Positano linen clothes and sandals made to measure.

Amalfi gives its name to the entire Amalfi coast and is one of the most sought after tourist destinations of the Campania region. The town is located along the mountain slope where the entwing streets and staircases that give the village a characteristic appearance. Once in Amalfi, attention is captured by the magnificent architecture of the cathedral, built on the central square, then continuing along the road leading to the mills where you can still make paper with the methods of the past. Along with Venice, Genoa and Pisa, Amalfi is remembered as one of the four Maritime Republics.

The jewel of the divine Amalfi Coast is located on the top: here is Ravello eached through narrow streets, with many curves and steep overhanging the mountain slope. Ravello offers a magnificent panorama that you can see from strategic locations such as Villa Cimbrione or Villa Rufolo.